…or just makes it look that way! This cool army-green utility bag has a bright orange “High Voltage” warning strap, suggesting that passersby better think twice before invading your space.

I’ve had one of these for about three months now and have gotten tons of comments on it. While it’s not big enough for a laptop (but apparently that’s in the works for the company)It’s a good size for the essentials, plus a big of extra room for goodies you pick up along the way.

Originally launched in 1983 by Motorola, the first cellphone had a huge pricetag and a waiting list of thousands who were impressed with the ability to be contacted by phone where ever they might be, ignited the wireless communications craze. You can get your own for about 50 USD at, Retrobrick, a UK-based company who warns, in small print, that “these phones use the analogue phone system and will no longer work in the UK. They may work in some areas of the USA but American networks are reluctant to implement new analogue subscriptions.” I’m thinking these need to be modded and replaced with some modern cellephone guts. Maybe we’ll see one soon from a Make-reading enthusiast [via] “The machines are small, the sound is gigantic, the scope is worldwide, the advance is unstoppable. Prepare your defenses.” That was the warning delivered to Chicagoans before 2 musicians armed only with Gameboys and a slew of high-energy, beat-heavy, unresistably-catchy chiptunes landed in the city. Includes pictures and links to videos and MP3s. 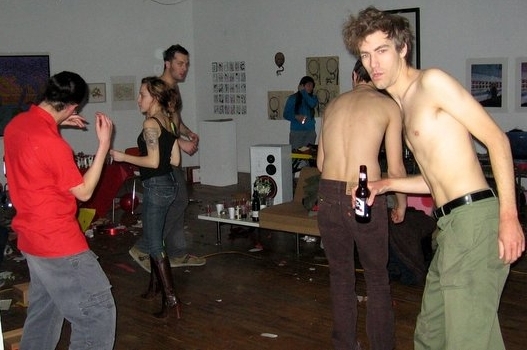 This was the scene at around 3am at Heaven Gallery on February 12 during Logan Bay’s set. It was pretty wild in case it’s not obvious from the photo. First up was The Machinist, then Lord of the Yum Yum, followed by myself (as Quantazelle) and Logan Bay ended the night. The night and the gallery opening were reviewed on Mediatron.
Here’s my setlist:

Here’s my laptop-dj setlist from Rodan:

Here’s my DJ set for the Subvaritrax Release Party at Sonotheque:

Yep, this is my new blog. It’s based off of the “narnia” template, but I changed the color scheme and graphics to sort of a nerdy-Art-Nouveau theme. I made all the graphics in Illustrator. The header drawing contains 4 resistors, 1 diode, 5 capacitors and 1 varistor. The post images consist of 4 resistors and one light-emitting diode (LED). The small category icons on the right consist of 4 resistors and one capacitor.

The background image is made from a repeating pattern of fan guards.